The biggest threat to Preston Market is cars.

I got thinking about this after I had lunch there last Friday. As always, I was taken in by the mad rush and vitality of the place and the sense that much of it is still essentially the same as it was when it started. I was surprised to learn that it’s a relatively young institution, having only been established in 1970 (although Preston proper is considerably older – it was connected to Flinders Street by rail in the 1920s and experienced a major population boom in the 1950s). 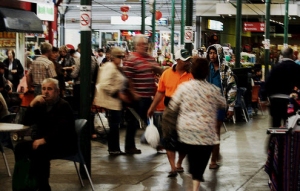 Initially, I was wondering if the Market is vulnerable to the increasing gentrification in the area, but then I realised Victoria Market has withstood demographic changes in the inner city reasonably well. Sure, it’s pretty middle class now but the deli and meat sections at Vic Market are unsurpassed in Melbourne. So while gentrification of Preston Market will undoubtedly diminish its authenticity – and that is the vital ingredient for some customers – it will not necessarily undermine its viability.

Which brings me to the threat to the Market posed by cars – not too many cars, but too few!

I saw a flyer issued by the Market parking manager to stall holders advising of a new parking scheme. I don’t know when it commences, but rather than fine parkers who stay beyond the initial free two hour period (one hour near Aldi), the new arrangement will charge them $1 for each additional hour. How that will work financially for the parking operator is a puzzle (how will they administer it cost-effectively?), but it’s their money. END_OF_DOCUMENT_TOKEN_TO_BE_REPLACED