Why is Gen Y driving less?

After growing consistently for many decades, car use is falling in developed countries (e.g. USA, Australia, Britain). A notable aspect of this decline is the fall-off in driving by young people.

New data from the US Federal Highway Administration (see here and here) shows that although they increased their share of the US population slightly over the period, those aged 21-30 accounted for only 14% of all miles driven in 2009, compared to 21% in 1995. Another study reports that in 2008 only 49% of 17 years olds had driver’s licenses compared to 75% in 1978. 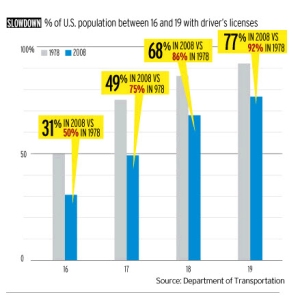 There is now a sharp difference between Gen Y and baby boomers. A typical 58 year old in the US last year drove 11,607 miles, while the average 28 year old drove just 7,011 miles.

Neither the GFC nor the recent escalation of petrol prices fully account for these changes because the decline in driving preceded these events. So what is driving Gen Y to abandon what has traditionally been one of the great rewards of coming-of-age?

The explanation usually advanced is that the internet has enabled electronic communication to substitute for face-to-face contact. As I’ve pointed out before, however, reputable researchers conclude the exact opposite – electronic communication increases the demand for face-to-face contact more than it substitutes for it. END_OF_DOCUMENT_TOKEN_TO_BE_REPLACED

Does a rail line to Melbourne airport make sense?

The Age ran a front page story on Saturday (Train derailed by buck-passing and vested interests) on the need for a rail link from the airport to the CBD. I say story, but as the headline and this quote indicate, it was more advocacy than news:

“But thanks to decades of buck-passing and pandering to vested interests by successive state and federal governments, Melbourne – unlike so many other cities of its size and wealth – does not have a railway line to its airport”.

So having pressed the civic pride button, it’s a pity The Age didn’t also push the rationality pedal and ask: is there a case for constructing a new public transport system (rail) to compete with the existing one (bus)?

I would quite like to have a rail line from the CBD to the airport, but as I’ve indicated before (here and here), only if it makes sense. Let’s look at some pertinent issues.

First, the feasibility studies undertaken by the Government conclude that the numbers for rail don’t stack up (yet). The most recent evaluations, undertaken in 2001 by BAH and in 2009 by IMIS, both concluded there is not a strong enough case to build a new rail line to the airport.

The Department of Transport projected rail would capture only 9% of all airport trips and would require a subsidy of $350-450 million over 10 years (in 2001 dollars).

Second, in 2003 the Government upgraded the Skybus service so it could deal better with congested conditions around the CBD and on the Tullamarine Freeway. According to the Transport Department, new roadworks enabled Skybus to bypass traffic delays at the Tullamarine/Calder Freeway interchange and at the city fringe. The package included lane widening as well as line marking changes to create an emergency lane wide enough for buses. END_OF_DOCUMENT_TOKEN_TO_BE_REPLACED