← Links for urbanists No. 1
Are too many houses empty? →

Are wind turbines bad for the countryside? 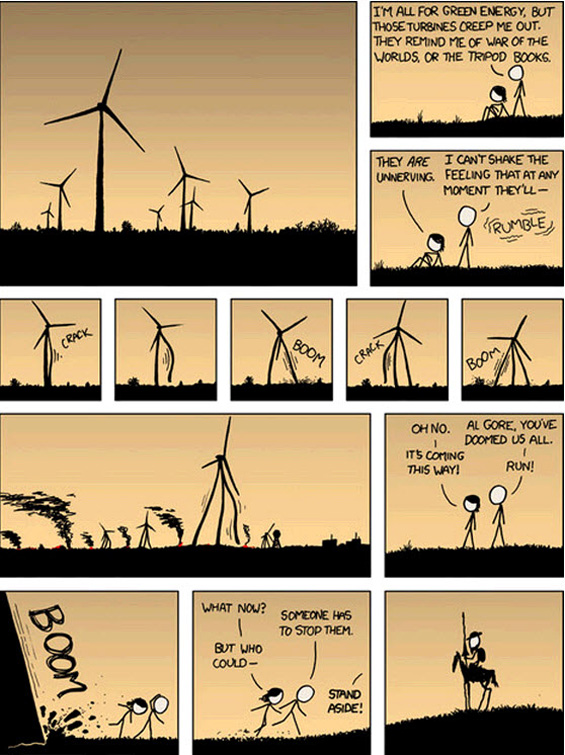 Earlier this week I watched the Four Corners story, Against the Wind, on the alleged health impacts of wind turbines and came away wondering just what the point of the program was. Based on what I saw, my clear impression is there’s no issue here – there’s simply no hard evidence of the supposed health dangers of turbines*. The allegations remind me of the scare-mongering around the dangers of winds turbines to birds, which I’ve discussed before.

But I was horrified (no doubt unintentionally) by the vision of rural landscapes blighted by row upon row of giant white robots stretching along the tops of the hills. An occasional turbine is novel, even an object of beauty, but to my sensibilities a massed army of towers is a scar on the countryside.

I know they’re not being erected in pristine bushland, but the sort of sweeping pastoral panoramas in the regions filmed by Four Corners – with green meadows, stands of trees and occasional rustic buildings – are extraordinarily beautiful. It’s a different aesthetic to natural bushland, but no less valuable for that.

As if we haven’t done enough visual damage by permitting ad hoc development on the urban fringe, now we want to make the country look like Texas’s endless oil derricks. We fight tooth and nail to protect the beauty of streetscapes in the cities (admittedly not always successfully), but the defacing of farming landscapes on a grand scale goes on with hardly a murmur of protest.

It’s true we urgently need to reduce carbon emissions but I don’t think it’s obvious we need to pollute the countryside to achieve that goal. That seems a ludicrous price to pay, effectively substituting one form of environmental damage with another.

Wind isn’t the only option we have to address climate change. Wind just happens to be the cheapest form of renewable power – with subsidy – we currently have available. However that calculation doesn’t account for the long-term damage done to scenic landscapes. Just as historically we’ve done with cars, we’re failing to price the negative externalities.

We’ve only seen the start of the likely damage. At present, wind accounts for circa 0.2% of world energy production. One estimate is the world will have to build 100 times as many wind farms in coming decades as we have today in order to get just 10% of world energy from wind. This would require every locality with wind potential to be cultivated as a ‘wind farm’ (sounds so benign).

What might seem an issue confined to a few out-of-the-way locations at present could be become much more widespread in the future. As of October last year, there were 1,052 wind turbines in Australia, a further 1,043 under construction and 4,304 with planning approval. It’s by no means inconceivable that in the decades ahead huge patches of elevated countryside will be disfigured by towering turbines. By then, what might be seen today as a symbol of a positive approach to the environment could well be seen as repetitive and ugly, like roadside billboards.

The visual impact of wind turbines is a deal-breaker for me (although I know people who aren’t even slightly bothered by them). But for this issue, I might otherwise overlook its key shortcoming – the inability to supply power consistently. As the Financial Review’s Mark Lawson points out, there still has to be an equivalent capacity in other forms of generation for those times when the wind isn’t blowing. Mark Diesendorf from the Institute of Environmental Studies at UNSW argues there are ways around this, but they all add complexity, difficulty and cost.

However rather than debate the merits of various alternatives to coal here and now, I’ll settle for highlighting the need for a better appreciation of the visual impact of wind turbines. All I ask is that this issue have greater prominence in discussions about cleaner energy options. It needs to be factored in. We shouldn’t just assume that anything “renewable” necessarily comes at no cost, because that’s rarely the case.

*Back to the issue of the health impacts of wind turbines, the new issue of the peer-reviewed journal, Bulletin of Science, Technology and Society, evidently has a number of articles indicating there could be more to the story than Four Corners showed (I’ve not read them). Here’s the press release.

14 Comments on “Are wind turbines bad for the countryside?”