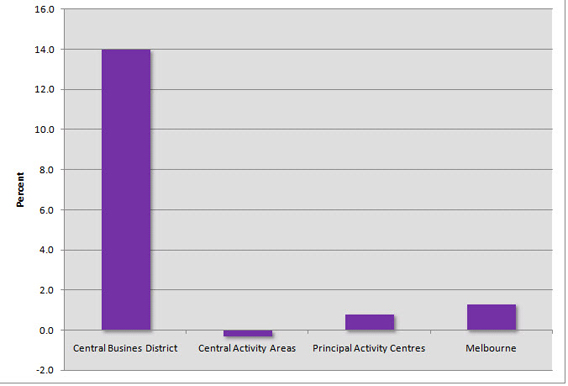 Average annual growth in population of centres (%) - data from BITRE

Melbourne 2030 envisaged growth of high density housing and office employment within established suburbs would be located in activity centres, especially those with a rail station. In fact it specified that 41% of all dwellings should be constructed in activity centres over the period 2001-30 (with 31% in Growth Areas and the rest dispersed in small projects throughout established suburbs – at present though, about half of all new dwellings are constructed on the fringe).

Locating more intensive development within strategically important activity centres makes a lot of sense. In particular, it means a larger number of people will be within walking distance of frequent public transport, giving them an alternative to driving. Bigger activity centres should be more sustainable and might even cost the public sector less in infrastructure outlays and operating costs.

Yet it doesn’t seem to be happening – outside of the city centre, only a small number of activity centres are experiencing significant growth in multi-unit housing. Moreover, according to research by BITRE, Melbourne’s six Central Activities Areas (CAAs) and 25 Principal Activity Centres (PAC) only accounted for 3.6% of all population growth in the metropolitan area between 2001 and 2006. The number of people living in CAAs fell (by -0.3% p.a.) over the period and the number in PACs grew by just 0.8% p.a. – much lower than the growth rate for the metro area and the CBD (see exhibit).

Nor are activity centres generally successful in attracting employment – BITRE found jobs growth was actually negative in the CAAs, falling by 0.5% p.a. between 2001 and 2006. Jobs grew by 1.25% p.a. in dispersed areas outside of centres over the same period, but by only 0.5% p.a. in PACs.

There are reasons why it’s hard to attract developers to larger centres. Assembling land is difficult – existing holdings are in diverse ownership, values are often high and lots may be small. Moreover, Planning restrictions mean suitable sites are in short supply or have constrained redevelopment potential. But perhaps the key issue is opposition to development from existing residents.

As the strong reaction to Banyule Council’s proposed structure plan for Ivanhoe shopping centre shows, many residents don’t like the idea of redevelopment at up to 4-8 storeys in their local centre. They fear higher housing and employment densities will increase traffic congestion and noise and they expect the character and familiarity of their local centre will change for the worse. They see few, if any, upsides for them personally from a higher density centre.

It seems putting most higher density redevelopment eggs in the activity centres basket isn’t paying off. The politics of dealing with existing residents is simply too hard for all levels of government, whatever their colour. That’s not surprising given residents generally feel redevelopment makes them worse off and the planning system emphasises the interests of local residents.

Economists like Edward Glaeser and Ryan Avent have proposed ways that in theory might give existing residents an incentive to be more accepting of redevelopment, e.g. residents could buy the right to remain living at low density. These are novel and interesting ideas but at the present time they’re simply not going to fly politically.

Any redevelopment within established suburbs is going to be difficult. However the level of opposition can be reduced, although by no means avoided, where more intensive development is proposed for disused industrial areas. Even so, “brownfield” sites come with their own set of issues, like potential contamination and possible alternative uses.

Further, there don’t actually appear to be many brownfield sites. The authors of Challenge Melbourne – the discussion paper prepared in 2001 as part of the Melbourne 2030 process – estimated suitable brownfield sites within established suburbs have a total potential yield of 65,000 dwellings. That’s impressive, but even if all of that estimate could be realised, it’s not a big enough contribution, given the number of households in Melbourne is now projected to grow by 825,000 between 2006 and 2036. END_OF_DOCUMENT_TOKEN_TO_BE_REPLACED