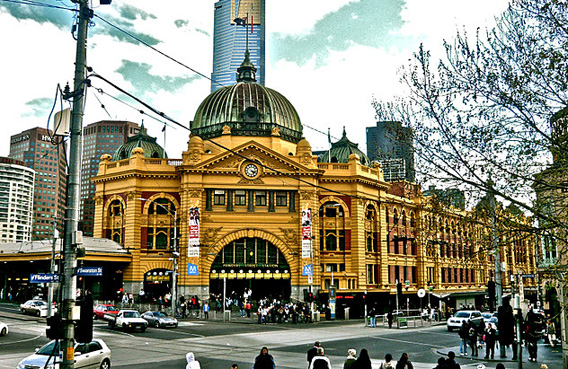 The Premier gave the Flinders St Station International Design Competition another nudge this week, announcing entries will be formally invited from architects mid next year, with the winner to be announced mid 2013.

Mr Baillieu indicated the project for the 4.7 ha site has two basic components. One involves “restoring and renovating the building” and the other is about “releasing any opportunities for further development”. According to The Age:

Mr Baillieu said renovation of the heritage-listed station would be very expensive, and the government was looking for ways to ”release some value” to help bankroll the development, including the possibility of a public-private partnership. A property developer will sit on the competition judging panel, as well as Victoria’s government architect, Geoffrey London.

I’ve previously questioned the sense of running this project as a design competition, but there are a couple of other aspects that also worry me.

One is that this isn’t really first and foremost an “architectural design competition”. That’s a convenient way to market the project because it sounds innocuous – everyone knows architects are sensitive characters who care about design, heritage and place.

But all the signs suggests this is really a search for commercial uses that will generate revenue for the Government – at least enough to pay for the restoration and renovation, but hopefully more. The key players will be organisations with the wherewithal to “release some value” – i.e. to identify, develop and finance new uses that generate profits.

These sorts of players are traditionally called property developers or merchant bankers, not design professionals. Architects will still have a key role in the physical expression of the new Flinders St Station precinct but they won’t be the motive force determining what sort of activities take place there.

So-called competition entries will primarily be commercial bids, rather than primarily design submissions. The novelty is the bid consortia will presumably all have to be led by architects, at least nominally.

The project is likely to be as much about the redevelopment, as the restoration, of the precinct. Redevelopment can be positive provided it is handled in a way that’re sympathetic to the transport, heritage and civic importance of this precinct. And there’s certainly plenty that needs to be done – addressing that horrible concourse-cum-food court for a start.

However redevelopment can also mean some of the values that define the precinct might be put at risk. Mr Baillieu recognises there could be new buildings but says they will have a “common sense” height limit. Hmmm……I doubt we all have the same number in mind!

Another key issue is the “competition” shouldn’t be conceived as a fishing expedition. A potential danger with competitions is officials, politicians and the public could be seduced by a spectacular proposal – a one trick pony – that fails in other important respects. The brief is thus supremely important. END_OF_DOCUMENT_TOKEN_TO_BE_REPLACED