Is The Age providing fair comment on transport issues? 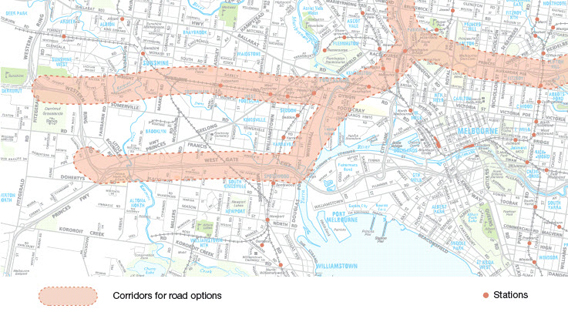 I take an agnostic view of freeway proposals – I don’t assume apriori that they’re all bad or all good. I prefer to look at the evidence first before deciding if a proposal has merit or is a poor idea. But it seems there are some who will overlook evidence to the contrary if it undermines their ideological view.

Like Kenneth Davidson in his column in The Age on Monday, Why the east-west road tunnel is a stinker, I have some misgivings about the tunnel proposed to connect Melbourne’s Eastern Freeway with the Western Ring Road. The Victorian Government has just submitted a proposal to Infrastructure Australia, seeking funding to develop the tunnel idea further.

My key concern is the anaemic benefit-cost ratio. But Mr Davidson, who’s a senior columnist at The Age, goes further. He reckons the proposed tunnel recommended in 2008 in the Eddington Report is a “stinker” and a “confidence trick”.

That’s because an earlier study undertaken for the Bracks government in 2004, the Northern Central City Corridor strategy (NCCC), found most of the traffic coming off the Eastern Freeway heads into central Melbourne. It found only 15% is bound for the northern or western suburbs. “In other words”, Mr Davidson says:

the public justification for the east-west link – that it would take traffic away from the central business district – was a confidence trick……The first question (Eddington) should have asked was where did the 2004 study go wrong.

I don’t think anyone disputes the NCCC study was negative about the case for the tunnel. Nor is Mr Davidson the first to raise this objection. The “gotcha” Mr Davidson seizes on with such alacrity is that Sir Rod Eddington apparently ignored the NCCC study’s key finding.

But it seems it’s Mr Davidson who’s doing the ignoring. The Eddington Report actually does consider the NCCC study. Moreover it deals with it in a way that is prominent and impossible to miss by anyone with their eyes open (read it – Chapter 5, page 129).

The Report argues it’s a myth that nearly all Eastern Freeway traffic is destined for the inner city. It says the NCCC produced diagrams that present “a distorted view of traffic distribution (and further NCCC modelling for a future link would have identified and addressed this issue)”.

In a section titled, ‘Myth 2: nearly all the Eastern Freeway traffic is destined for the inner city’, It argues the NCCC study didn’t look beyond the capacity of existing roads or the ultimate destination of traffic once it left the NCCC study area.

First, given the roads in question, the traffic distribution (identified in the NCCC study) is not surprising: at the end of the freeway, there are ten freeway standard traffic lanes (five each way). By the time traffic reaches Macarthur Avenue in Royal Park, the corresponding ‘connection’ is a two-lane road (one lane each way). The traffic distribution is as much a function of the roads available, which progressively reduce in capacity towards the west, as it is a reflection of the demand for a particular direction of travel.

Secondly, when the (Eddington) Study Team analysed how traffic from the Eastern Freeway is distributed (with the analysis closely matching the NCCC distribution), it revealed that around 40 per cent of the daily traffic from the freeway travels beyond the central city area – to the south and the west. That is the case with the current network: in the future, EastLink will add a new dimension.

The Eddington Report also argues (page 137) the NCCC study focussed on Eastern Freeway traffic and didn’t fully consider traffic using adjacent streets instead. Moreover, it didn’t recommend against the tunnel because insufficient vehicles would use it, but rather because the high cost of construction yielded an inadequate benefit-cost ratio. END_OF_DOCUMENT_TOKEN_TO_BE_REPLACED