← How to ‘green’ the Grand Prix
What role for high-rise towers in Melbourne? →

This is a common view. In June last year The Age’s editorialist said “Melbourne’s population of 4 million already sprawls across roughly 100 kilometres in all directions, occupying a bigger area than much more populous cities such as London or New York”. 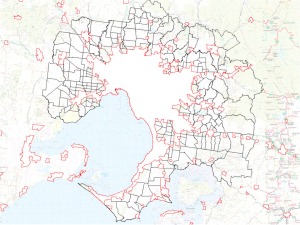 Defining the size of a city is a fraught task because it depends on how the boundary is defined. For example, using the standard administrative boundary adopted by the metropolitan planning authority – the Melbourne Statistical Division (MSD) – the metropolitan area covers a mammoth 7,673km2.

However this definition locates the boundary well beyond the urbanised or built-up area. It stretches from Little River in the west to Warburton in the east. The eastern boundary is 75 km from the CBD. The western and northern boundaries are around 50 km from the CBD.

This is clearly an unreasonable definition of Melbourne to use in the context of the debate about urban sprawl. On this basis, the Planning Minister, Justin Madden, could quite reasonably argue that the additional 430 km2 he sought to add to the growth areas last year was quite modest!

Another approach is to use only the urbanised area. Including the satellite developments of Melton and Sunbury, the built-up area of Melbourne covers around 2,000-2,500 km2, depending on the cut-off densities assumed at the periphery for what qualifies as ‘built-up’.

On this more reasonable definition, Melbourne is only around the 30th most geographically extensive city in the world, not the eighth. The distance from the CBD to the fringe in the west (Melton) and east (Silvan Reservoir) is less than 40 km and in the north (Craigieburn) around 30 km. While Pakenham in the south-east is 55 km from the centre and parts of the Peninsula even further, Melbourne does not sprawl “100 km in all directions”.

Using the built-up area as the definition, Melbourne emerges as a relatively dense city compared to US cities (based on data comparing international cities, here). Of the 72 US cities with a population larger than 500,000, only 8 have a higher average density that Melbourne. Separate research by Dr Paul Mees of RMIT (here) is consistent with this finding.

But even on the basis of urbanised area, where does the city end? It seems that any development that is contiguous with the existing urban area is regarded as sprawl. For example, a long thin finger of near-continuous low density development along a transport corridor might house relatively few people but is nevertheless universally regarded as sprawl.

On the other hand, especially in Europe and the US, nearby towns that are separated from the city by open space are often regarded as independent and hence not part of the city’s sprawl, even though they are frequently as connected economically, culturally and socially as any conventional outer suburb.

The role of satellite cities is illustrated by the experience of London. The same feature article in The Age cited above says that “forever outward expansion (of Melbourne) is not a necessity. London has barely touched its urban perimeter for decades but has grown in population with better use of old industrial and commercial land”.

There are a number of reasons explaining why London has barely touched it’s boundary and one of them is that it is surrounded by an extensive system of satellite towns. There are around 40 ‘overspill’ or satellite towns like Hemel Hempstead and Milton Keynes that are essentially London’s outer suburbs. They are similar in concept to Melton and Sunbury.

Any failure to count satellites within the metropolitan population of a city makes Melbourne look more sprawled by comparison, especially since our two major satellites – Melton and Sunbury – are, quite properly, counted administratively as part of the MSD. It is instructive that almost 60% of Melton’s workforce, despite being separated by 10 km of green wedge, commute to ‘mainland’ Melbourne (not that I endorse satellites – see an earlier post here).

All this indicates there is a need to define a city’s boundary in a more rigorous way. To my mind the two key measures are population density (i.e. extent of contiguous urbanisation) and commuting catchments. Agglomeration economies, especially in labour, are after all the reason cities exist. Satellite cities that are closely tied to the continuously urbanised area by commuting should be considered part of Melbourne. Those that aren’t should not and neither should thinly populated peri-urban areas.

I don’t have access to the data, but I would expect that a significant proportion of the workforce in Drouin and Lara commute into the MSD and that they in turn get a fair number of workers coming from the MSD. On the other hand, I’d be surprised if there is a lot of commuting between Lake Mountain and Lilydale (or locations closer to the centre of Melbourne).

There are still some difficult issues to address in this approach – for example what are the cut-offs for density and commuting? Do social linkages count? – but I think it takes us in the right direction. There are also other approaches to defining a boundary, for example based on social and cultural connections, but they are hard to quantify and therefore to justify and win agreement.

Ultimately boundaries are likely to be shaped by administrative convenience, historical consistency and political issues. However public debate on key matters of public interest like whether or not Melbourne should continue to grow at the fringe would be improved by a clearer consensus on where Melbourne begins and ends.

11 Comments on “How big is Melbourne?”