← Minister for Sustainable Population: What’s in a name?
Why is Gen Y driving less? →

The Age reported that houses and apartments in Australia are bigger than those in the United States, which has traditionally had the most spacious homes:

“While Australian home sizes have risen 10 per cent over the past decade, research shows sizes of new American homes have fallen from a peak of 212 square metres to 201.5 square metres”. 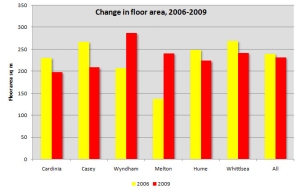 Now property group Oliver Hume has thrown some new light on home sizes in Melbourne. They say that excluding Melbourne’s west, the median size of homes in the other five growth areas actually fell slightly over the last three years.

The largest absolute fall was in Cardinia, where the median home size fell from 267 sq m to 209 sq m, or by 57 sq m. Home sizes also fell in Casey, Hume and Whittlesea but increased in Wyndham and Melton. This does not, however, indicate an across-the-board change in preferences toward smaller houses.

According to Oliver Hume’s research manager, Mr Andrew Perkins, much of the drop in house size can be attributed to the increase in the number of first home buyers in the 2007-2008 period, when they accounted for an unprecedented 70% of all sales across the growth areas.

“These houses are generally smaller homes as they house singles or small families and affordability is paramount,” Mr Perkins said. He said home sizes shrank in late 2009 when the Global Financial Crisis was easing but have not yet rebounded to the 2006 levels.

However at the same time as the median size fell, median house and land prices rose substantially in all growth areas, from $305,000 to $390,000. Wyndham’s median price increased 61% to $445,000, reflecting its attractiveness for second and subsequent home buyers. Wyndham is notable as an area where the median size of homes actually increased.

Oliver Hume Director Mr Paul Ciprian predicted that house sizes would stabilize as the benefit from State and Federal first home owner assistance schemes diminished. He said people would forgo land size in order to maintain affordability without compromising on house size. “On that basis”, he said, “the scales will tilt back to the 2006 sizes and builders will accommodate houses on blocks down from 580 sq m to 470 sq m.”

There are a number of implications. First, the current decline in lot sizes seems to be primarily a response to affordability rather than a permanent change in preferences towards smaller lots. Second, the share of commencements in the established suburbs is likely to increase as demand from first home buyers in the growth areas falls away, boosting the Government’s compact city achievements. Third, the data underlines the importance of looking at the composition of housing indicators in order to understand fully what is happening.

3 Comments on “Are new outer suburban homes getting smaller?”