← How much time do Melburnians spend commuting?
You talkin’ to me? →

Are we set to commute even further? 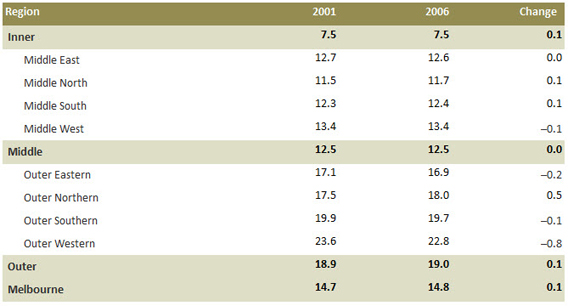 The Age says jobs in Melbourne are losing pace with sprawl – it cites a new study by BITRE which predicts “an increase in the average commuting distance” by 2026 and a rise in journeys to work involving a road distance of more than 30 kilometres.

If a rigorous, hard-nosed body like the Bureau of Transport, Infrastructure and Regional Economics is saying things are going to get worse in the future, it’s worth sitting up and taking notice, right? It’s true BITRE does say that, but it’s also true the media tends to err toward a sensational rather than a sober interpretation of any given facts. In this instance the story is a bit of a beat-up.

For a start, it’s hardly news that commuting distances could “increase” over a period of 15 years given the spectacular growth in population projected for Melbourne. What matters is the size of any increase – if it’s only a 1% increase over the entire period, that’s an infinitesimal 0.06% p.a. However if it’s (say) 15%, i.e. 1% p.a., that’s worth taking note of. However The Age is silent on this score.

BITRE doesn’t say anything about the size of the predicted increase either. There’s a good reason for that. BITRE’s study isn’t an authoritative prediction of future commute distances as implied by The Age’s story. It doesn’t make forecasts based on the latest data, using innovative modelling techniques and complex algorithms as one might expect. In fact the report isn’t even about the future! – it’s actually about historical population, employment and commuting patterns in Melbourne up to 2006.

The Age relies on what is in effect an ill-advised throwaway line by BITRE. The report states (p 333) that if the Victorian Government’s spatial projections of population and employment through to 2026 are realised, the likely commuting implications include….”an increase in journeys to work involving a road distance of more than 30 kilometres and an increase in the average commuting distance”. There’s no analysis or supporting information behind this assertion, so too much shouldn’t be made of it. The prominence given to it by The Age suggests BITRE should’ve thought a bit harder before including it in a report about the past and the present.

However what BITRE actually has analysed in-depth is the historical change in travel distances – and here the picture is if anything somewhat mixed. The report looks first at what’s happened over 2001-06 (see exhibit). That isn’t necessarily a guide to what will happen in 2026, but it shows how current patterns are trending. The picture it reveals isn’t one of rampant increases in commute distances but rather one of relative stability.

Some caution is needed though. While not as reliable as Census data, ABS surveys suggest the average commute distance in Melbourne may have increased at a faster rate since 2006. If so it’s not clear why – perhaps it reflects the greater use of trains for the journey to work over the last five years? It’s a pity BITRE chose to undertake this extensive study so close to the release of the 2011 Census results, as the latter would’ve provided more up-to-date information.

Overall though, there’s no objective basis for The Age’s story. I’m even more mystified by the paper’s claim in its opening para that the number of people driving more than 30 kilometres to work in Melbourne will increase in coming years.

I can’t find anything in the BITRE report to support that contention. Apart from having very little to say about the future, the report doesn’t disaggregate the historical data on commuting distance by mode. My best guess is The Age has interpreted BITRE’s use of the term “road distance” to mean driving, whereas BITRE probably (somewhat clumsily) meant non-Euclidean distance.

There’s still the related issue of whether commute distances are simply too long. I’ve looked before at commute times, but not specifically at distance – I’ll do that another time.

7 Comments on “Are we set to commute even further?”